The U.S. has not been thrown out of Afghanistan. Quite the opposite.

Washington is involved in managing the strategic transition towards the formation of a Taliban Islamic Emirate.

Earlier reports suggested that a so-called interim Afghan administration was to be headed by Prof. Ali Ahmad Jalali, who just so happens to be a US citizen.

Troop withdrawals coupled with a US sponsored color revolution?

The Doha Negotiations with the Taliban

America’s withdrawal from Afghanistan has been  the object of extensive negotiations between Washington and the Taliban. An earlier deal was signed in Doha in late February 2020 during the Trump administration.

The transition timeline had been agreed upon. On  August 09, 2021, US special envoy Zalmay Khalilzad arrived in Doha with a US team of negotiators for 3 days of top level discussions with representatives of both the Taliban and the defunct government of Ashraf Ghani.

In the wake of the Doha meeting on August 13, the “Green Light” was given to Taliban Forces to capture Kabul as well as most of the provincial capitals. (See Southfront, August 18)

The evacuation of the US embassy described by the media was a smokescreen. The entry of the Taliban into Kabul which prompted the US to evacuate its embassy, had been carefully planned and agreed upon. The presidential palace was taken without a fight.

On August 13, reports suggested that the candidacy of Ali Ahmad Jalali, a  distinguished professor at the Washington based National Defense University‘s Near East South Asia Center for Strategic Studies (NESA) (and a former Minister of the Interior in the Hamid Karzai government) had been contemplated to lead a so-called interim administration. Based at Fort Lesley J. McNair, Washington DC, The National Defense University is  a partner institution of the US Department of Defense.

While the US is involved in astutely managing the transition towards the formation of a pro-US Taliban government, the appointment of Professor Ali Ahmad Jalali who lives in Maryland is unconfirmed. According to a Reuters Report (August 16):

“Former Afghan Interior Minister Ali Jalali on Monday said he was never under consideration to become transitional president for Afghanistan and that he would never have accepted the position.

“The bottom line is that I’ve never been contacted. I’ve never been considered. I never thought about it, and I’m not interested,” Jalali, who served as Afghanistan’s first interior minister after a 2001 U.S.-led invasion, told Reuters.

Jalali, who is a professor at the U.S. National Defense University in Washington, spoke by telephone from Washington.

He was responding to a Reuters report that quoted three diplomatic sources on Sunday as saying he would likely be named to head a transitional administration in Kabul as the Taliban took over the capital.”

Almost 20 years later, both the media and the Biden administration, in chorus, continue to point to the 9/11 attacks and the role of Al Qaeda, allegedly supported by Afghanistan, when in fact (amply documented) Al Qaeda was an intelligence asset created by the CIA.

Lest we forget, Osama bin Laden had been recruited by National Security Advisor Zbigniew Brzezinski in the 1980s during the so-called Soviet-Afghan war.

The legal argument used by Washington and NATO to invade Afghanistan was that the September 11, 2001 attacks constituted an undeclared “armed attack” “from abroad” by an unnamed foreign power, and that consequently “the laws of war” apply, allowing the nation under attack, to strike back in the name of “self-defense”.

“if it is determined that the [September 11, 2001] attack against the United States was directed from abroad [Afghanistan] against “The North Atlantic area“, it shall be regarded as an action covered by Article 5 of the Washington Treaty”. (emphasis added)

The bombing and invasion of Afghanistan which commenced on October 7, 2001 was described as a “campaign” against “Islamic terrorists”, rather than a war.

To this date, however, there is no proof that Al Qaeda was behind the 9/11 attacks.

Even if one accepts the official 9/11 narrative, there is no evidence that Afghanistan as a nation-state was behind or in any way complicit in the 9/11 attacks. There were no Afghan jet fighters in the skies of New York on September 11, 2001.

The Afghan government in the weeks following 9/11, offered on two occasions through diplomatic channels to deliver Osama bin Laden to US Justice, if there were preliminary evidence of his involvement in the 9/11 attacks. These offers were casually refused by Washington. In the words of George W. Bush, it’s “non-negotiable”. 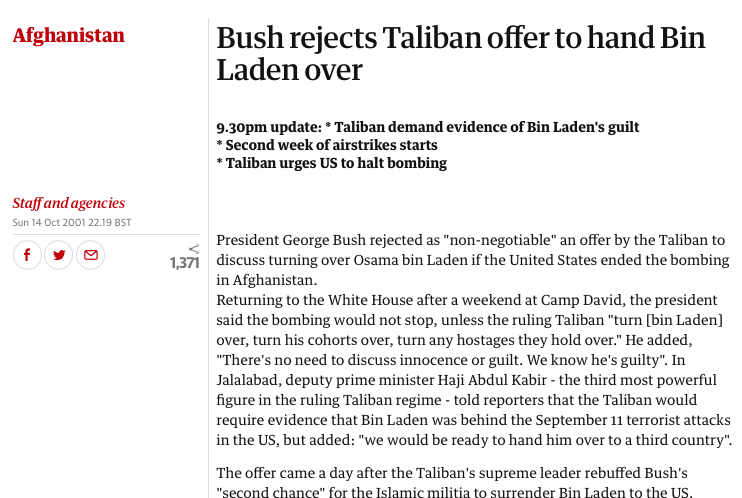 The Smoking Gun. Narcotics and the Afghan Opium Trade

One of the key strategic objectives of the October 2001 invasion of  Afghanistan was to restore the opium trade following the Taliban government’s successful 2000-2001 drug eradication program which led to a 94% collapse in opium production (down to 8000 hectares in 2001, see graph below).

At the October 2001 session of the UN General Assembly (which took place barely a few days after the beginning of the 2001 bombing raids), the Taliban Government was congratulated by the United Nations: “No other UNODC member country was able to implement a comparable program”. What is the Future of the Narcotics Economy?

How will  this multibillion trade (which until recently was protected by US forces) be affected by the withdrawal of US troops from Afghanistan? Private mercenary companies are currently involved in protecting the opium trade.

There is a geopolitical power play with Russia, China, Iran and Turkey. Afghanistan is integrated into China’s Belt and Road. How this will evolve is yet to be determined.

Strategic control over the Afghan opium trade will play a key role.

Taliban Out, Taliban In:

The US initiated a war on October 7, 2001 against the Taliban government which had unduly sabotaged the opium economy in 2000-2001. That war lasted more than nineteen years.

And now the Biden Administration is involved in pushing for the formation of a renewed Taliban proxy regime which will unconditionally endorse the lucrative multibillion dollar trade in narcotics.

A followup article on the role of China is envisaged.