Lexi Sturdy, election war room lead, sits at her desk during a demonstration in the war room, where Facebook monitors election-related content on the platform, in Menlo Park, Calif., on Oct. 17. Jeff Chiu/AP

On October 19th, Facebook revealed its new “war room” as part of its solution to combat election interference and the diffusion of “fake news.”

This “war room” includes a team of specialists who are continuously working to presumably stop the spread of misinformation and propaganda.

It is unclear how well it is working or if at all.

On October 17th, Facebook opened its doors to reporters at its new workspace in its Menlo Park headquarters. Engineers, data scientists, threat investigators and other Facebook experts from 20 teams recently began collaborating inside the so-called “war room.”

It has been in operation since September. The 24-person team is tasked with tackling various safety and security issues, the team oversees a broader staff of roughly 20,000, according to Samidh Chakrabarti, director of product management and civic engagement, Facebook.

As reported by the Guardian inside, digital dashboards displayed real-time information about activity on the platform. CNN played in the background, and the wall displayed a large American flag and motivational posters saying “Focus on impact” and “Bring the world closer together.”

Some screens were “off the record” and could not be photographed. The names of the employees could also not be published. “We don’t have a crystal ball. We’re not going to be able to predict every tactic,” said Nathaniel Gleicher, cybersecurity policy chief. “Having all these teams in a room together will help.”

The team was recently tested during the first round of Brazil’s presidential elections, during which it detected a false post claiming that Brazil’s Election Day had been moved from October 7 to October 8, due to national protests.

When the fake news began to trend, the team took notice of it and removed it within an hour.

Facebook also noted that it has a fact-checking partnership with the Associated Press in all 50 states for the midterms. However, as reported by the Guardian, the continuing collaborations with third-party factcheckers have not all been successful.

Asked how Facebook has been measuring the success of the factchecking and if the company had new data on its effectiveness, Harbath told the Guardian that it was “one piece of the puzzle” and cited “automated work” to reduce the reach of “clickbait” and “ad farms.”

However, the new political ad moderation system also has issues. Just hours after the journalist briefing, USA today reported that Facebook had removed ads incorrectly, after its auto-detection tool incorrectly labeled them “political.” They simply used descriptions such as “African-American” and “Mexican” or were written in Spanish.

The tech giant also partners with the Atlantic Council. Described by Strategic Culture as “a leading geopolitical strategy think-tank seen as a de facto PR agency for the U.S. government and NATO military alliance.”

It is no secret that the Atlantic Council supports NATO, as it is primarily NATO funded, which can easily be seen from its list of supporters. 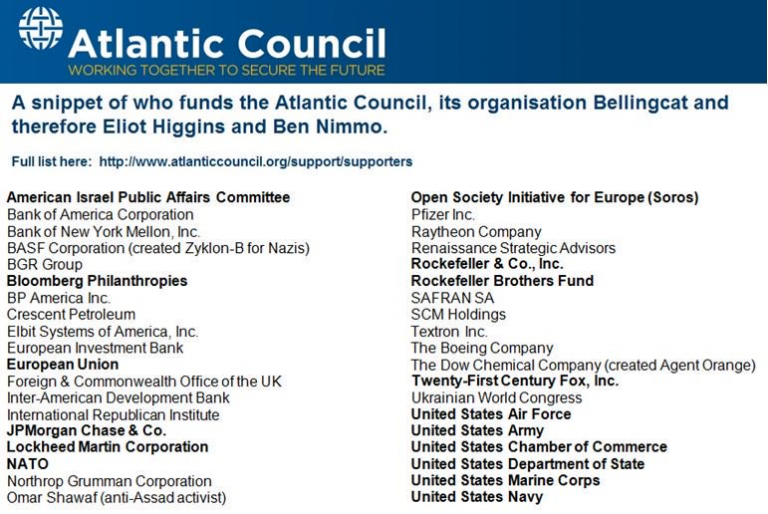 On May 17th, Facebook released a statement announcing the partnership and dubbing the Atlantic Council its “eyes and ears” in their joint mission of combating “fake news and disinformation,” but also playing a “positive role” in ensuring democracy at a global level. “This will help increase the number of ‘eyes and ears’ we have working to spot potential abuse on our service — enabling us to more effectively identify gaps in our systems, preempt obstacles, and ensure that Facebook plays a positive role during elections all around the world. We know that tackling these problems effectively also requires the right policies and regulatory structures, so that governments and companies can help prevent abuse while also ensuring that people have a voice during elections. The Atlantic Council’s network of leaders is uniquely situated to help all of us think through the challenges we will face in the near- and long-term.”

As a result of the efforts of the Atlantic Council’s Digital Forensic Research Lab, Anti-Media, a source of independent journalism had its twitter account with over 2 million followers closed, as reported by Global Research.

Furthermore, Global Research reported that many of the pages taken down had already been targeted back in 2016 by the McCarthyist webpage PropOrNot.not, endorsed by the Washington Post, in an effort to arbitrarily mark pages that they believe somehow are connected to Russian propaganda efforts.

Facebook and other platform’s fights against “fake news,” however are worrying for some. Because it would not be the first time alternative and conservative media outlets were targeted by the tech giants. A high-profile recent example of this is InfoWars’ Alex Jones who had all of his accounts suspended. He is a controversial figure, but numerous accounts of people related to alternative media outlets were also suspended.

It would not be surprising if soon there is an outcry of such sources that claim they are being censured, after they begin being targeted by Facebook’s automated system or even by members of its “war room.”